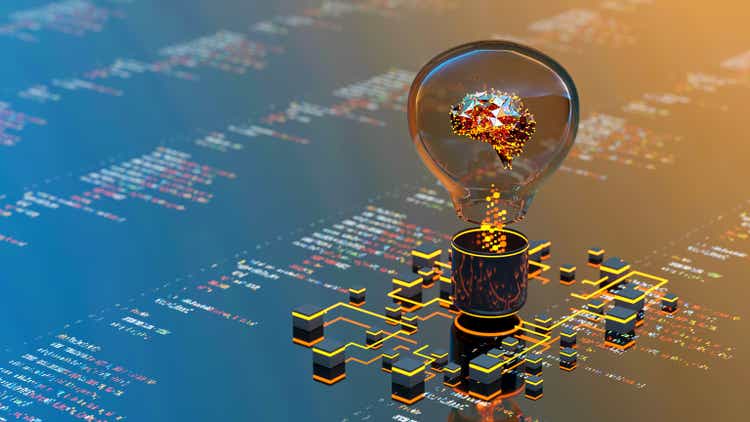 However, guidance for FY23 was disappointing, with expected revenue growth of 22-25% YoY, about 7% below expectations and implying a fairly significant deceleration from last year’s 38% year-on-year revenue growth. Also, the non-GAAP operating loss isn’t expected to improve in FY23 and, looking under the hood, a lot of that “profitability” comes in the form of top-ups to compensation. stock-based.

The company releases first quarter results at the end of the month (expected August 31), and while I think they’ll likely beat and move higher in the quarter, I’m still a bit hesitant at this point.

First, the stock has rebounded quite well over the past few months, up around 20%, despite the disappointing FY23 forecast. market” of a company whose revenues increase by 25% or more year-over-year.

Second, while long-term profitability will likely continue to improve as the business evolves, non-GAAP operating loss is expected to be about the same in FY23 despite revenue growth from 22 to 25%. This means that incremental revenue additions in FY23 are not profitable. In addition, their non-GAAP operating loss benefits from the company adding back the large amount of stock-based compensation, which reached almost 50% of revenue in FY22.

To finish, as the valuation has pulled back, the stock is currently trading around 4.2x FY23 revenue. Yes, revenue guidance is probably conservative for the year, but for a company with slowing revenue growth considerably and profitability in a few years, it becomes difficult to justify a much higher multiple.

While I’m bearish in the short term, I think long-term investors would find any pullback in the stock an attractive opportunity for accumulation.

During the company’s FQ4 in early June, they reported another quarter of beating expectations, with revenue growing 38% year-over-year to $72.3 million and expectations of $1 million. Encouragingly, subscription revenue grew 31% year-over-year and now represents just under 80% of total revenue.

Unsurprisingly, gross margins remained strong at 81%, and I am confident that the trend of gross margins above 80% will continue over the long term. This will contribute to the company’s long-term trajectory towards improving bottom line profitability.

What continues to weigh on my sentiment is the company’s lack of non-GAAP operating profit. Yes, revenue growth, customer growth and RPO remain very strong and demand is likely resilient in a tougher macro environment, but the company continues to lose money.

The graph above shows how the company expects to generate a target operating margin of 2% in fiscal year 24/25. However, one has to ask how much of this non-GAAP operating profit is real profit, versus the non-GAAP add-backs.

Nonetheless, the company has nearly $1 billion of cash on its balance sheet to fund its growth over the next few years. So while I’m not worried about the company’s ability to invest in growth, I’m cautious about its underlying profitability.

Additionally, the company provided guidance for FY23 which was disappointing. Revenue growth is expected to slow to 22-25% YoY for the full year and while the company may beat and raise expectations each quarter, that still implies a fairly significant deceleration from 38% growth. % YoY observed last year. The FY23 revenue forecast is also 7% lower than expected, so even if it ends up beating its current forecast, it could hit initial consensus expectations for the year.

Additionally, the non-GAAP operating loss for the year is expected to be $76-86 million, it looks like underlying profitability may take longer to materialize.

I think expectations have been lowered considerably since the company provided its disappointing guidance and, with its upcoming earnings at the end of the month, investors will see how conservative the guidance is.

Since the beginning of the year, the title remains down more than 30%. However, and to my surprise, the stock has actually risen nearly 20% since the fourth quarter earnings release. After the FQ4 report, I thought the stock would be in the penalty zone as decelerating earnings and ongoing non-GAAP losses would weigh on sentiment. I was wrong with that assumption, as investors instead viewed the “cheap” valuation as justification to buy this downed stock.

Currently, the stock has a market capitalization of around $2.3 billion and with nearly $1 billion in net cash, the company’s value stands at $1.3 billion. Using the company’s likely conservative FY23 revenue forecast of $308-316 million, this implies a FY23 revenue multiple of approximately 4.2x.

While the multiple has fallen significantly from historical levels, earnings growth has slowed significantly and investor sentiment towards high-value stocks has cooled. With fears of a potential recession around the corner, investors are turning to more defensive stocks, especially those with sustainable levels of profitability.

Even if revenue growth beats expectations every quarter, it will be difficult to return to 30% year-on-year growth. Given that 25% revenue growth is still very healthy, the lack of profitability makes it difficult to justify a valuation well above 4-5x forward earnings.

For now, I’m staying away from C3.ai, as the combination of revenue growth and profitability shouldn’t warrant further multiple expansion. With the release of the company’s first quarter results at the end of the month, I think we could see some volatile trading sessions. Although I’m leaning a bit lower on the stock heading into the quarter given the challenging macro environment and the stock’s 20% rebound in recent months, I think long-term investors term will find in any setback a good opportunity for accumulation.

Understanding Payday Loans – The Basics and Beyond

Paytm, proxy notices and a puzzling lack of shareholder activism in India