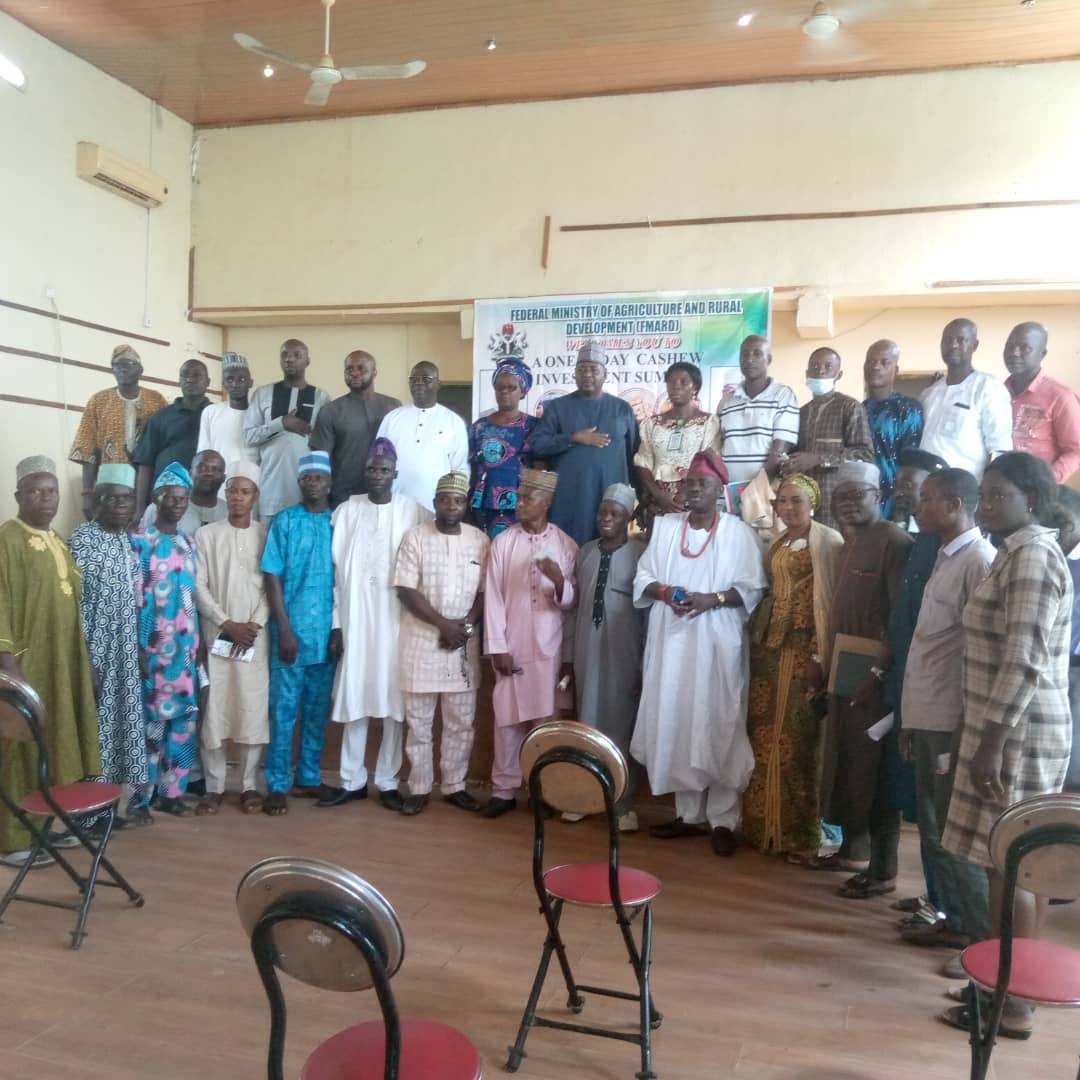 FG trains stakeholders on the cashew value chain in Kwara

The Federal Ministry of Agriculture and Rural Development on Tuesday trained agricultural actors in Kwara State on the cashew value chain.

The permanent secretary of the ministry, Dr Ernest Umakhihe, who was represented by a deputy director, Mr Bernard Ukattah, said the program aimed to allow stakeholders to discuss issues to move the industry forward.

He said that one of the main constraints of the cashew industry in Nigeria was the inadequate processing capacity of our factories and processing equipment.

â€œOf the 170,000 tonnes of cashew nuts produced in Nigeria, only five percent is processed, while the raw cashews are sold to cashew buying agents for export.

â€œIt means exporting Nigerian jobs to other countries and it must stop.

â€œThe only way to stop this is to increase the processing capacity of the cashew industry in Nigeria and harness the capacities of other cashew derivatives sub-sectors.

â€œThis has the capacity to create around 500,000 jobs for our youth and women in rural and urban centers,â€ he said.

The permanent secretary noted, however, that financing agriculture should not be left to the government alone.

He said there was a need to attract investment and funding outside of the government’s budget allocation.

Also speaking, Federal Ministry of Agriculture and Rural Development state coordinator Dr Aliu Kabir said the summit aimed to expose stakeholders on ways to harness the potential of the cashew industry as alternative to petroleum.

Alhaji Tunde Salami, Program Director, Kwara Agricultural Development Program (ADP) said that cashew is one of the cash crops to be reckoned with as nothing is a waste, therefore, the training will benefit participants. on many cashew nut derivatives.

One of the resource persons, Dr Omolola Etukudo, Kabba College of Agriculture, said that at the end of the training, it was expected that cashew stakeholders would be able to add more value to cashews.

â€œWe will also guide them on how to seek loans to improve their investments, as I will talk about ‘Financing Cashew Value Chain Development and Its Economic Relevance to the Non-Oil Sector’.

“It will create employment opportunities for young people to solve the problem of kinship in society.”

Complain: A viral WhatsApp voice note, allegedly authored by the director and CEO of WhatsApp, claims that users will have to start paying for WhatsApp services.

Verdict: The viral WhatsApp voice note claim is a hoax. The content is not new and has been released as a broadcast message several times in the past.

VERDICT: The claim that water from snails (snail slime) and spike milk can cure partial or complete stroke is false.

FULL STORY: On July 26, 2020, Facebook user Prince Nnamdi Enyinnaya Emelelu Eluwa claimed in an article that water obtained from snails (snail slime) and spike milk can cure an accident partial or complete cerebrovascular. The post, which is over a year old, was recently re-shared by other Facebook users.

Marburg virus: what you need to know about the disease recently detected in West Africa

On Monday August 9, 2021, the World Health Organization (WHO) confirmed the first case of Marburg virus in West Africa in Guinea. This development has sent shivers down the spines of West Africans who are still grappling with the effects of the coronavirus pandemic. But before this dreaded disease is greeted with rumors and misinformation, here’s what you need to know about the virus. APC says it’s creating a health emergency trust fund …

VERDICT: The assertion is false and misleading. The United States did not give the Nigerian federal government a 48-hour ultimatum to detain Abba Kyari.

Do I need a shareholders’ agreement?