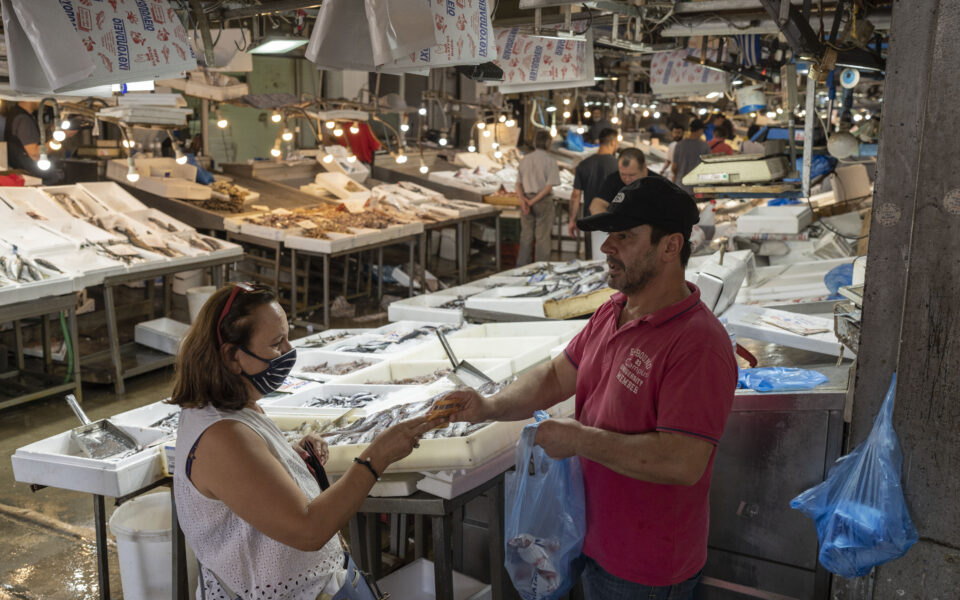 A woman buys fish at the central fish market in Athens. According to the Labor Institute of the General Confederation of Greek Workers (INE/GSEE), since April this year, the minimum wage has lost 19% of its purchasing power. [AP]

There is indeed an inflation problem in the United States and Europe, and its reappearance after decades is a global phenomenon. No country, no economy, no one is immune.

However, inflation is not a neutral phenomenon. As long as consumption holds up, businesses pass on increased costs to their customers. Even if they keep the same rate of profit, they increase their profits in absolute numbers, since the same rate of profit is calculated on increased base prices. In addition, many companies are taking advantage of the situation to increase their profit margins. Real profits are rising, while real wages are falling, UBS Global Wealth Management chief economist Paul Donovan recently wrote in the Financial Times, referring to the US economy. The problem is called earnings inflation.

According to the Labor Institute of the General Confederation of Greek Workers (INE/GSEE), since April this year, the minimum wage has lost 19% of its purchasing power. In 2022, when inflation is hovering around 10%, the losses are greater for the lowest incomes, reaching 40% for households whose monthly income does not exceed 750 euros. Also note this: in the first half of this year, Greek natural gas suppliers recorded the second highest profit margin in Europe. There are profits, and there are huge profits.

Moreover, the fact that inflation is currently a global problem does not explain why the same basic consumer goods and necessities are much more expensive in Greece than in Germany or in other European and Mediterranean countries, even though some of these countries have higher wages, higher rents and other factors that affect costs. This does not explain why the same supermarket chains sell substantially cheaper goods in their Munich stores than in their Athens stores. The answer is that competition does not work in Greece. Instead, we have the “buddy market”, where easy and big money is made.

These systems are untouched by Greek governments – certainly not the current one – even though the tsunami of price hikes, if left unchecked, will turn into a kind of plunder at the expense of people’s incomes. There is no magic solution. But if a government wanted to put an end to this tsunami, it would act with responsibility, seriousness and professionalism – and that would certainly not work against the independent watchdog, the Hellenic Competition Commission. And after obtaining from the competent bodies a real picture of the economic details of each sector (so as not to be in the dark), he would invite all the players concerned – from distribution chains to importers, producers and manufacturers – and impose an agreement and broad cooperation. to lower prices.

Nothing has been done in this direction. Instead of a real fight against inflation, there is the impression of a fight, with the launch of the so-called “household basket” – a set of products in supermarkets protected against inflation. It is a “basket” full of holes. The price of products entering it will increase modestly. But if this price should increase excessively, then it will be removed from the basket – with system and order.

From Stakeholders to Architects: Designing Buildings Resilient to Climate Change