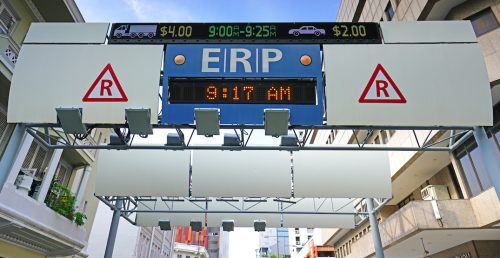 Vancouver City Council’s key decision on whether to move forward with advanced planning for transportation pricing – such as road tolls – in downtown Vancouver will be made in 2023.

A recent internal memo from city staff indicates that city council will make the decision to go ahead and refine the recommended transport pricing option (also known as mobility pricing) next year. , after the municipal elections of October 2022.

City staff are still expected to report by the end of 2022 on stakeholder engagement and feedback, as well as the results of the feasibility study, before making any further recommendations. No crucial decisions are expected to be made in this year’s update, but it’s unclear whether the update will take place before or right after the election.

As a result of the update, city staff will develop transportation pricing schemes in 2023 that include limits and potential fares, for public consultation, and then considered by city council in the key decision.

If city council approves new planning in 2023, the final city council decision on whether to implement transportation pricing would be made in 2024, after city staff made improvements to the program.

The form of transportation pricing for vehicles entering and exiting the downtown Vancouver Peninsula could be implemented in 2026, a year later than originally planned. The whole project towards implementation has four planning phases, starting with the current feasibility study.

Transportation pricing was one of 32 projects in the City Staff Climate Emergency Action Plan (CEAP), which was approved by city council in November 2020. At the time, it was estimated that it would incur a technology and installation cost of $ 250 million, which would be covered by a net annual income of $ 50-80 million after covering ongoing capital and operating costs.

City council then set aside $ 1.5 million for initial planning work, including $ 700,000 in 2021 for a dedicated team and consultants to conduct economic analysis and consult with stakeholders. The remaining $ 800,000 will be spent in 2022 to â€œcomplete stakeholder engagementâ€.

The recent update provides City Council with highlights of the preliminary planning carried out to date since the end of 2020.

Of note, the City of Vancouver has since signed a memorandum of understanding with TransLink on transportation pricing and is working on a partnership to include â€œa regional perspective for downtown transportation pricingâ€. Additionally, city staff have also contacted the three North Shore municipalities – as North Shore residents rely on travel through the Lions Gate Bridge and downtown Vancouver to access the rest. of the region – and the provincial government, which holds the jurisdictional authority. on road toll mechanisms.

In November and December 2021, municipal staff and the team of consultants conducted approximately 80 interviews with stakeholder organizations – representing businesses, essential services, residents, tourists, and people who depend on private vehicles, active transport and public transport for their work – to gather their priorities, interests and concerns.

A series of workshops with stakeholders will be held in January and February 2022, followed by additional workshops or interviews with other stakeholders in March and April.

The debate on the CEAP decision of the city council in November 2020 largely focused on the potential for transport pricing. At the time, the downtown road toll proposal was heavily criticized by business groups – given concerns about the impact on businesses, especially with the expected economic fallout from COVID-19 on several years – and city officials and regional leaders stressing the importance of a broader regional perspective than had been presented by City of Vancouver staff.

There are also concerns that the revenues collected by the City of Vancouver through its municipal road toll system will divert significant revenues from a possible future regional mobility pricing system intended to help finance the costs of operation and development. expansion of TransLink. As the transition to battery electric vehicles accelerates, the transit company needs new sources of revenue to replace its declining fuel tax revenues.

In October 2021, Vancouver City Council narrowly voted in a vote to scrap the controversial plan by city staff to enact mandatory parking permits for all residential streets, effective February 2022. It was about of the second largest CEAP project.

This is what the shareholding structure of Theseus Pharmaceuticals, Inc. (NASDAQ: THRX) looks like